Quotes from A Course in Miracles (Text) related to the process of forgiveness as a function of the Holy Spirit through out 'little willingness':

Ch.16 The Forgiveness of Illusions

“No needs will long be left unmet if you leave them all to Him Whose function is to meet them. That is His function and not yours. He will not meet them secretly, for
He would share everything you give through Him. And that is why He gives it.
9 What you give through Him is for the whole Sonship, not for part of it.
Leave Him His function, for He will fulfill it if you but ask Him to enter your
relationships and bless them for you.”

“Never approach the holy instant after you have tried to remove all fear and hatred from your mind. That is its function. Never attempt to overlook your guilt before you ask the Holy Spirit’s help. That is His function. Your part is only to offer Him a little willingness to let Him remove all fear and hatred and to be forgiven. On your little faith, joined with His understanding, He will build your part in the Atonement and make sure that you fulfill it easily.”

“44 Happy dreams come true, not because they are dreams, but only because they are happy. And so they must be loving. Their message is, “Thy Will be done,” and not, “I want it otherwise.” The alignment of means and purpose is an undertaking impossible for you to understand. You do not even realize you have accepted the Holy Spirit’s purpose as your own, and you would merely bring unholy means to its accomplishment. The little faith it needed to change the purpose is all that is required to receive the means and use them.”

v. The Little Willingness
“32 The holy instant is the result of your determination to be holy. It is the answer. The desire and the willingness to let it come precedes its coming. You prepare your minds for it only to the extent of recognizing that you want it above all else. It is not necessary that you do more; indeed, it is necessary that you realize that you cannot do more. Do not attempt to give the Holy Spirit what He does not ask, or you will add the ego unto Him and confuse the two. He asks but little. It is He who adds the greatness and the might. He joins with you to make the holy instant far greater than you can understand. It is your realization that you need do so little that enables Him to give so much.”
Posted by Dean P at 3:08 PM No comments:

ACIM LESSON 321. Father, my freedom is in You alone.

"LESSON 321. Father, my freedom is in You alone."
This is clearly the personal, identified self, just as we are, that is adressing the "I am". Prior to the "I am", notions of bondage and freedom were absent. Suddenly, we found ourselves as a needy dependent self. In addressing our "I am", we look towards the only possible exit from our personal hell. We discover what we thought we were was incorrect and limited. The "I am" rests here and now as our most obvious escape to freedom. Externals offer nothing now.
Posted by Dean P at 9:12 PM No comments:

Some texts pointing to unity and the problem of perceiving apparent differences:


A Course in Miracles, Lesson 261: Let me perceive no differences today.

"Father, You have one Son. And it is he that I would look upon today. He is Your one creation. Why should I perceive a thousand forms in what remains as one? Why should I give this one a thousand names, when only one suffices? For Your Son must bear Your Name, for You created him. Let me not see him as a stranger to his Father, nor as stranger to myself. For he is part of me and I of him, and we are part of You Who are our Source, eternally united in Your Love; eternally the holy Son of God.


We who are one would recognize this day the truth about ourselves. We would come home, and rest in unity. For there is peace, and nowhere else can peace be sought and found."

22. Now, therefore, I am known to ye by my name Nuit, and to him by a secret name which I will give him when at last he knoweth me. Since I am Infinite Space, and the Infinite Stars thereof, do ye also thus. Bind nothing! Let there be no difference made among you between any one thing & any other thing; for thereby there cometh hurt.


11. 'Even by the mind this (Brahman) is to be obtained, and then there is no difference whatsoever. He goes from death to death who sees any difference here.'

A true yogī observes Me in all beings, and also sees every being in Me. Indeed, the self-realized man sees Me everywhere.


For one who sees Me everywhere and sees everything in Me, I am never lost, nor is he ever lost to Me.

Inquiry- See what the mind is. What is 'the mind'?


Investigate, see what 'the mind' is.


"What is the mind?" "What is my mind"? Stop, close your eyes, take a look, try to find exactly what 'the mind' feels like and where it is located and what it is.


Rest in the above inquiry for as long as feels comfortable. 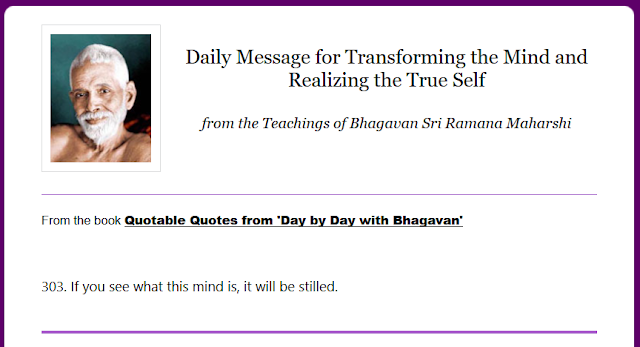 Q: I am very much attached to my family and possessions. How can I conquer this attachment?
M: This attachment is born along with the sense of 'me' and 'mine'. Find the true meaning of these words and you will be free of all bondage.
(Nisargadatta) 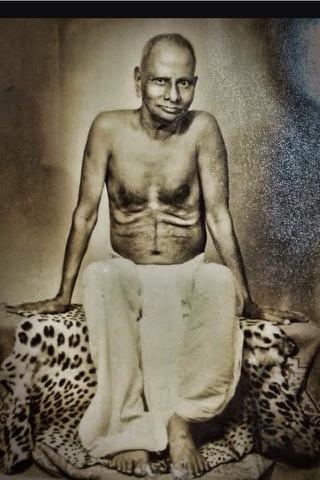 Email ThisBlogThis!Share to TwitterShare to FacebookShare to Pinterest
Labels: Me, mine, Nisargadatta, self-inquiry

"My True Identity abides in You."

Today's lesson from A Course in Miracles is a direct call to the truth of our situation, as we really are.


According to Eastern nondual systems, such as Vedanta, and Kashmiri Shaivism, our very being "I" (or that which is aware of these words) is in fact, no different from divinity. The "Son of God" referred to in ACIM makes use of this concept. A "Son of God" is purely an extention of God Itself, and one and the same in identity.


"The Son of God is part of the Holy Trinity, but the Trinity Itself is One. 5 There is no confusion within Its Levels, because They are of one Mind and one Will. 6 This single purpose creates perfect integration and establishes the peace of God. 7 Yet this vision can be perceived only by the truly innocent." (ACIM T-3.II.5)

One simple and direct way of approaching this lesson (283) is to address the "You" of divinity as simply that which is aware of the 'doer' of the lesson. The Self or "I" which is always present as our true self. After repeating today's idea, and simply resting in the presence of our own beingness (in which the body-mind appear), we can directly know our true Identity, which encompasses all the other little identities and forms we mistakenly assigned as ourselves.


Here's to our one, united Identity. May we come to know this today.

To practice or not to practice - nonduality notes - 1


I was reading a post on a Tony Parsons group, whereby someone questioned why TP seemed to be promoting  'his' message, and that it almost seemed evangelical. There was a response given by one of the members, detailing how 'this message' wasn't anyone's in particular, and that it differed from other nondual teachings.

The difference given was that most nondual paths involve 'doing and performing action in order to become more aware, more nondual, whole etc.', while with TP's message, the idea is that things are already as they are, and that you are just THIS. That's it. Nothing to do, and nobody to do it. Nothing can be attained that trumps this already existing perfection that is nondual unity. No practices are necessary, or effective.

My response to the above is both agreement, and disagreement, and a note that this (above) view of nondual paths that use practices, is almost always misconstrued by the neo-Advaita type do-nothing-nowhere-to-go crowd.

Let's set the record straight- practices in regards to nonduality and nondual teachings do not aim at attaining anything new. Nothing new CAN be attained apart from what already is. They are not aimed at developing the individual (as opposed to self-development trainings), although some training in basic attention or concentration may often be involved. This is because even to read this sentence, some training is needed by the apparent individual, and an amount of attentiveness and focus is required to contemplate. The same can be said for attending a Tony Parsons meeting, reading a book on nonduality, or sitting in a satsang with a nonduality teacher that advises individuals present to do nothing and cease seeking.

What nondual practices aim at doing is this: creating space for the apparent invidivual to awaken from the dream that he/she finds themselves in, and seeing that all of it was nothing more than a dream, an illusion, and case of mistaken identity. Nothing changes, and nothing new is attained. An error in perception, and belief (thought), is seen through. That's it. The rope laying on the ground that was mistaken for a snake, is seen as just being a rope. The snake never existed except as a thought/belief, and thus the idea/belief/perception that there was a snake, is dropped. Things are allowed to be as they always have been and always will be. The story that there was a practice to complete becomes just another part of the dream story that has ceased to take place along with the individual.

There is a big fat proviso however, in assuming that one need do nothing-- and it is this-- does the individual see the snake or the rope right now on the ground?? This cannot be reasoned away or thought about or intellectualised away. If someone sees a snake, and is in a state of fear, then yes, there's apparently some work that needs to take place!! Advising such a person that there's nothing to do sounds idiotic, even though it may ultimately be true. It shows clearly that such an adviser is working in a state of level confusion, and speaking a language that the receiver cannot understand.


Not doing anything in such a situation, or trying to intellectualise things in a nondual way is a huge ego trap that leads nowhere.. as many a burned-out nonduality student/teacher/former seeker can show. Being thus disillusioned with the teachings, who knows when such an individual will then approach the teachings again, or have another opportunity to awaken. Hence the admonition in traditional nondual paths to find a valid teacher, path, etc.

So yes, practice is important. It matters. Not for gaining anything, but for undoing the illusion of separation and individuality that seems to have taken place.