Seeing the elements and forces play out.

I recently found and interesting exercise from an old Franz Bardon book (Initiation into Hermetics). Most of the time, these old "occult"/"hermetic" type books generally work on the level of manipulation of the five elements and rarely venture beyond this. Sometimes, however, one stumbles upon useful practices, such as this one, enabling one to get a better bird's eye view of how the elements and forces play out within one's individual consciousness.

The aim of the exercise is increased mindfulness around conditioned personality traits that normally play out unconsciously throughout one's waking existence.

The exercise is pretty simple, and relates to noting down (in a private diary) for a few days, all of the seemingly positive and negative traits (ie. personality) one experiences over the time period. Each is then assigned to an elemental quality (ie. fire, water, air, earth). I also added the 'force' dimension (ie. 3 gunas: rajas/activity, tamas/darkness, satva/conscious-harmony).


-    "Quick temper while on the phone today, impatience" (Fire, Rajas)
-    "Resistance to going to bed late at night, knowing it was helpful" (Water, Tamas)
+   "Motivation to wish well for random stranger this morning" (Fire, Satva)
+   "Appreciation for food today during lunch" (Earth, Satva)


There is no effort to change these reactions, but rather develop observation & remembering skills.

There's also no hard-fast rules for assigning the qualities, the aim is more around becoming aware of how the elements and forces play out within one's consciousness during the day.

After a few days, a useful side-exercise would also be to notice the witnessing consciousness within which these elemental forces play out.

(Ride Waite 'Wheel of Fortune' card below, depicting the interplay of elements and forces). 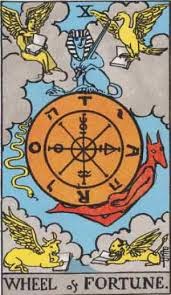 Most of us have heard the admonition, "Watch your thoughts". It's almost like Yoga101 or Meditation101. Such a simple practice, surely just for beginners and those starting on the path of single pointedness or concentration, right?

Any of these practices (sadhana) taken to the extreme, have the capacity to take an apparent individual "all the way". The reason why spiritual aspirants make little progress is chiefly because they drop one practice in favour of another, or don't stick with a simple practice until.. and beyond until.

Watching or observing thoughts not only introduces the watcher to the realisation that there is a subject/object set-up happening with thoughts (and the subject is totally identified with thought or feeling-thought), but also that ultimately the watcher itself (you and me) is yet another thought!

Nothing can be said ultimately about any practice, since the aim of a practice is to take one beyond the mind, and thus beyond intellectual description and understanding.

One key is enough. Keep going until the (imaginary) door we are trying to unlock opens of its own accord.

Here is an excellent tip from Krishnamurti on the topic:

Tat tvam asi - That thou art.


​The Supreme Word (Mahavakya) or divine mantra "Tat tvam asi" (That thou art; you are That) has been used as a mantra, japa and sadhana since time immemorial within the Hindu traditions (Vedas, Vedanta, Yoga schools etc.)
However, as pointed out by jnani sages (such as Sri Ramana Maharshi, Sri Sadhu Om and others), it is in fact, not a word to be used as a mantra, japa or yoga practice- much to the chagrin of yoga practitioners caught on the level of dualism (i.e.. 99% of spiritual practitioners).
It is in fact an invitation to investigate and turn one's attention back onto the first person- examining exactly what is this "I"?
Since we cannot completely know "That" in whatever external form it appears (and much less so in the sense of a Divine Godhead!), we are left with only one direction- knowing oneself in the first person, which is "I". We know ourselves intimately on a certain level, and we know that we exist.
If "I am That", what is this "I" that is being pointed to in the scriptures as being Divine in nature (and equal to "That")?
On examination of the "I", the apparent self (ie. you and me as individuals) may discover much, and rather than listing some conclusions here, it would be much more worthwhile for anyone reading this- including the writer- to investigate immediately and find out by direct experience. What is this "I", where does it emanate from? What is it's flavour and feeling? Can it be held for any length of time in awareness?
As a pointer, it would be worth considering that anything observed cannot (by logic) be the observer. Hence observing the physical sense objects such as this body, normally taken as "I", leaves no choice but to accept that the body is not "I". Continued in this way, the inquiry progresses to its ultimate conclusion.
Once and when the ultimate conclusion is reached, in silent observation and direct knowing, then the Mahavakya is clearly understood. 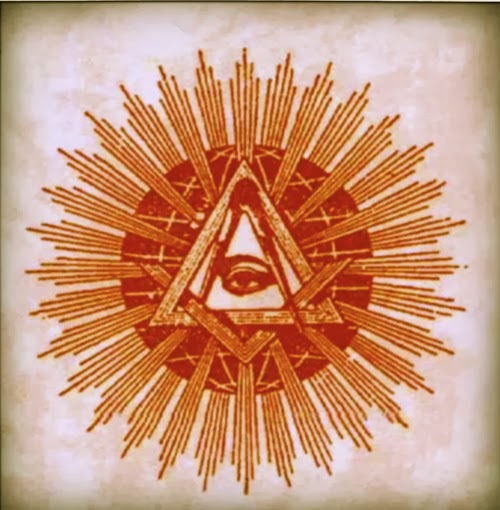