No such thing as awareness? Awareness just a construct? A new fad in spiritual circles.

I recently saw a re-posting by Scott Kiloby (article below) on challenging the idea that 'awareness' and 'consciousness' are not 'real', but just mere constructs. This thrust is doing the spiritual circuits these days, with a number of teachers coming out in an attempt to challenge the notion that awareness-is-all etc. (which was popular during the last few decades thanks to Neo-Advaita type popularity in spiritual satsang circles).


This idea (that awareness/consciousness is just a construct and not real or the basis of all) has actually been around for a little longer, like 2500 years, in Theravada/classical Buddhism. Some teachers like to think that they're being all innovative etc., in challenging this notion, or getting their readers to challenge the idea that awareness-is-all. Their students then get all cocky and run around the Internet challenging others to 'find awareness' or 'find consciousness' etc.. like it was an item one finds in the pantry.


What I'd like to ask these teachers though is this--> Are you then substituting yet another speculation for the 'awareness-is-all' belief-- ie. that awareness is just an empty construct? Or that reality doesn't consist of just awareness?
Because it certainly seems so. Nowhere on these blogs, posts and rantings, can I find any hint that this idea should be actually investigated via direct, clear, practical means, other than reasoning things out (which gives a temporary ok-ness to one's intellect). These teachers are also entirely missing the point that the 'awareness' teachings that make use of the word 'awareness' ALWAYS imply that awareness is not an object, not findable, etc. etc., and that 'awareness' is a pointer for use with very specific practices that lead to the unshakeable experience of what 'awareness' or 'not-awareness' actually IS. The awareness teachings (with the exception of Neo-Advaita) are not attempting in any way to posit a theory of the universe whereby one goes around sheeping the idea that 'awareness is all' and behaving in certain ways that affirm that belief.


So perhaps teachers that are proudly attempting to blow away the notion of 'awareness' should instead focus their efforts on guiding students (and likely themselves) into using 'awareness' as a practical pointer for self-inquiry, or not using 'awareness' at all, but engaging in other deep contemplative practices (such as Insight, vipassana etc), and thus doing away permanently with their own egoic identifications that lead one to posit the above philosophical nonsense (and also make a profession / living out of 'teaching' others what 'reality' is, an how students can deal with their 'problems' etc. via paid-for seminars and workshops etc.)


This post might appear a little inflammatory, though the point needs emphasising that 1. awareness isn't an object 2. awareness teachings aren't attempting to define a new theory of how the universe operates and is put together 3. awareness teachings make use of very specific practices that lead to results beyond intellectual philosophising, beliefs and speculations.

What if awareness isn’t real? A recent scientific study found that awareness or consciousness is a construction of the mind like everything else – like the self, our world views, all of it.

This latest scientific discovery is not particularly groundbreaking. In fact, postmodern philosophical explorations in the last century have essentially obliterated inherent metaphysical notions like awareness or spirit. They have torn these notions to shreds in so many ways and from so many angles that it is embarrassing in those circles to posit such notions. Whatever we think is pregiven as a reality is exactly not that. It is a construction. This has been dealt with so directly that there are now things like non-metaphysical nonduality and post-metaphysics popping up. Yet, most of the spiritual community is ignorant of what science is currently saying and what these postmodern explorations have uncovered about how our minds conceive – essentially “make up” – everything, even our most profound metaphysical notions. Even though our spiritual circles are slow to see this, we have all already seen it, yet we often turn a blind eye to it. For example, those who follow certain regional traditions and teachings tend to see what those teachings and traditions teach and nothing more. For example, a Buddhist is not going to find Union with Christ. A Christian is not going to realize nirvana. True nature is realized only by those who follow teachings that say that there is a true nature and that this is what you are. I found this out long ago when I would meet with people who had experiences of the dropping away of everything. They didn’t follow any teachings. When I suggested they were seeing their true nature, they looked at me as if I had just said “You are a squirrel.” Even when they began to call their realization “true nature,” they did so by taking that on as a conception, a context for what had been seen. And that’s the mind, through and through.

Awareness gets thrown around as if it is the final realization, as if everything is just awareness. But look around – nothing in the universe is labeling itself awareness. Labeling happens through the mind. And to say that we have to be aware in order to even see a universe is still the mind, for it posits a division between what is aware and what one is aware of. All divisions are of the mind. They are constructions.

The perennial philosophy itself, which is the notion that there is one pregiven reality that we all come to see, regardless of our particular tradition or spiritual view, has been obliterated also. If there is one pregiven reality, why is everyone still arguing about it? Is reality arguing with itself? How would that happen anyway if there is one reality? Why do Buddhists, Advaitists, Scientists and Christians still assert that whatever they are realizing is what everyone else is realizing as one fundamental truth? Could it be that what they are realizing is only what their teachings and traditions make room for? Could it be that the notion of one fundamental truth is just another way the ego wants to be right? If so, that has nothing to do with a pregiven, nonconceptual reality. That is all about self.

Is this the end of metaphysical notions like awareness? I say “no.” It just means it is time for a change in how we view these things (or non-things). Setting up the notion of awareness can be helpful on one’s path to freedom. It provides a way to identify less with thoughts and other arisings that come and go. But inevitably, many land on that conception as a final realization, still dividing the universe in two, between awareness and all that other stuff that comes and goes.

We often hear that all there is, is Oneness. But did you know that many schools of Buddhism do not posit Oneness as a final insight. Instead, they say it is empty too, like everything else. It is a construction.

Wow, this sweeps the proverbial rug out from under us. It calls on us to look at our reality differently – to stop taking the words of spiritual teachings, science and religion on face value. It calls on us to look at our conceptions, no matter what they are and no matter how profound they appear to be.
But isn’t this what freedom is about anyway? Isn’t it about not getting cozy within mental prisons that create more divisions and, instead, letting the fire of freedom burn everything up?

If you are willing and ready to let that fire burn it all up, nothing that is said here will offend you. Instead, it will excite you at the possibility of going deeper then where you are currently landing in your conceptions of reality. If this offends you, and you wish to argue with me, be prepared. I’m not defending a view here. I’m merely inviting you to examine your own. You’d only be arguing with yourself. Apparently, that’s what reality does.

The mind. Seek it. 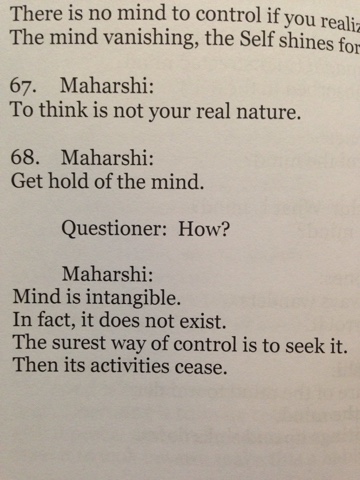 A lot of people spend years trying to figure out what the "I am" focus is all about. Nisargadatta mentions he spent three years or so focusing on it, and was liberated. Others have talked about it, via self-inquiry, Gurdjieff work, and even through Zen kian use.
It's really nothing more than going back to the idea of focusing on one's apparent personal sense of self, consciousness, wakefulness etc. Just the sense of being awake that happens every morning as opposed to deep sleep or unconsciousness. It's like focusing on the TV screen rather than the images, assuming we were a TV set.
The practice is very simple. Sticking with it for days, weeks, months and years is the hard part, and VERY few have the tenacity to do so- hence Nisargadatta's insistence that only a few in a hundred thousand (later revised to a few in a million) would really understand it and arrive. 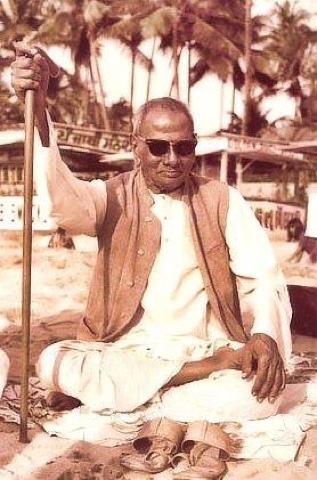