The idea of 'enlightenment'.


A quote from Sri Nisargadatta ('I Am That'):


"The idea of enlightenment is of utmost importance. Just to know that
there is such possibility, changes one's entire outlook. It acts like a
burning match in a heap of saw dust. All the great teachers did nothing
else. A spark of truth can burn up a mountain of lies. The opposite is
also true. The sun of truth remains hidden behind the cloud of
self-identification with the body."

Some spiritual teachers seek to destroy the image or false idea of 'enlightenment', and thus give the antidote of 'non-existent enlightenment'. That is to say, they negate the possibility and existence of enlightenment, and explain it as a non-event, a concept and something that does not exist.

This can serve for those who have conceptual images of enlightenment that pertain to an individual attaining something extra on top of what the individual already is.

Unfortunately, non-existent enlightenment also becomes a belief, in that the individual then takes it that there is nothing other than the self-identified state of being an individual, and 'suffering' is a part of life etc. Nihilism and other philosophies often follow. Other solutions to this problem are then inadvertently sought after.

In contrast, Sri Nisargadatta explains that the idea of 'enlightenment' is very important. For the self-identified individual, this idea becomes a beacon of light in that it provides a 'way out'  from suffering, limitation, and the mess that one inevitably finds oneself in as an individual in the world. Seeking may then happen, or not, but a shift occurs with the introduction of this idea. Of course, further down the track, this idea will need to be dropped, as it will become an obstacle in itself. But initially, this idea must be taken up, as the first step or first instant of a new direction away from the same beaten path that the conditioned individual has held for time immemorial.

As the individual comes to know itself as an image, and identified consciousness becomes purified from the habit of identifying with external objects and confusion, then it can be seen that there is nothing to attain apart from What is obviously apparent and existent, and has been so for all eternity. Until then, the idea of 'enlightenment' has an important place in the world of the individual for those who identify as an individual.

Is spiritual practice needed (if the world is just a dream?) - question.


Some comments from Michael James on the question of why spiritual practice, or reflection is even needed (or anything) when "the world is just a dream, and the dreamer can't actually do anything"-- a common Neo-Advaita idea.

In this comment, the questioner puts forth the idea that it would be a mistake to even consider the world to be a dream, since the person or dreamer can't do anything.

MJ: “If that is your view [that it is a mistake to try to consider the world to be a dream], how would you explain what Bhagavan teaches us in the final sentence of the seventeenth paragraph of Nāṉ Ār?, namely: ‘பிரபஞ்சத்தை ஒரு சொப்பனத்தைப்போ லெண்ணிக்கொள்ள வேண்டும்’ (pirapañcattai oru soppaṉattai-p-pōl eṇṇi-k-koḷḷa vēṇḍum), ‘It is necessary to consider the world like a dream’?”Your central argument seems to be, ‘it is a mistake to try to see the world as a dream because it is ridiculous for the dreamer to “try” because that very attempt is part of the dream too’, but by that logic it would be a mistake for us to do any spiritual practice, including self-investigation and self-surrender, because whatever spiritual practice we may do is a part of whatever dream we are currently experiencing. The reason Bhagavan advised us to practise self-investigation and self-surrender is that they are the only means by which we can wake up not only from this dream but from the underlying sleep of self-ignorance, in which all dreams occur.According to Bhagavan any state in which we are aware of anything other than ourself is just a dream, so we can practise self-investigation and self-surrender only in a dream, but that does not mean that it is a mistake for us to try to practise them. Quite the contrary, it would be a mistake for us not to try to practise them, because if we do not try to do so how can we wake up from this sleep of self-ignorance?

Is there a place for Kundalini and "Kindalini awakenings" in the nondual teachings?


Q: Is there a place for Kundalini and "kundalini awakenings" in the nondual teachings?

The question of "kundalini" and "kundalini awakenings" often comes up with newcomers entering the nondual teachings, and especially those who may have encountered Hatha yoga, New Age teachings, and spiritual schools that arose in the 20th Century (e.g. Theosophy, Spiritualism, Western Occultism etc.)

There are scores of modern spiritual teachers who are still espousing much nonsense about kundalini, "raising consciousness", and the role of kundalini as a necessity in one's "spiritual progress".

Unfortunately, most of this is rubbish, and often dangerous, based on superficial readings of Patanjali, or misinformed teachings and bad translations of texts that entered the mainstream in the early 20th Century.

Unless one is studying traditional Hatha Yoga, under a qualified and experienced teacher one-to-one, it would be well advised to leave aside completely the practices of pranayama, forced breathing, chakra work, and anything related to 'awakening the kundalini'. Sadly, there have been many who have not heeded such advice, or have been misled by 'well-intentioned teachers paving the road to hell', and who have ended up with permanent damage to their body-mind.

Back to the question.

The reason that there is no place for 'kundalini' or 'kundalini work' in the nondual teachings is that kundalini work and its related energy activities are nothing more than an arising, a temporary happening, that occurs in the body-mind as a result of the interplay of the 5 elements and 3 gunas. Consciousness as the mind-body identified individual has an experience, which it thinks is important, and thus builds up new experiences based on the belief that it has somehow progressed or changed into a better version of itself. This energy, of which, the individual believes it can manipulate, does give rise to temporary psycho-physical changes in the body-mind. Further, the ego-initiated effort of manipulating such energies in the body-mind strengthens the ego's belief in its own autonomy-- which is not helpful in bringing about its apparent end.

Since the individual and the body-mind are ultimately an appearance in the nondual field of awareness, their import is the same as per the results attained from activities such as jogging, climbing a mountain, swimming underwater, fasting, and other such actions that the individual thinks it can perform to change its apparent reality-- all of which have zero effect on the nondual situation as it is appearing here and now-- which is actually perfect, not in need of change, and whole.

Some sages, such as Sri Nisargadatta, have said that the jnani has no interest at all in Kundalini, since the jnani is completely beyond and prior to such activity. Knowing this directly, where is the need for any particular experience? Others, such as Sri Ramana Maharshi, have commented that the activity of self-inquiry would actually achieve the same result as any 'kundalini' experience, with the difference that any result would happen of its own accord, without the involvement of the ego, and in a naturally unfolding (and smoother fashion). "My own experience" here, has verified both of these comments. It was reported by some that Gurdjieff equated the experiences of kundalini with his literary invention of the 'Kundabuffer' and its maleficent effects on people (due to wrong use).

In summary, if a teacher starts talking about kundalini, and kundalini awakenings, then one should run in the other direction. 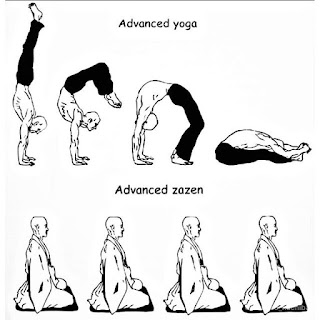